I’m writing this blogpost while being wrapped in a fuzzy blanket, drinking some hot tea, and blowing my nose every two minutes. That’s right! You’ve guessed it. I came down with a cold. It’s no surprise that I’m sick, since everybody around me has been sniffing and coughing for weeks. I’m honestly surprised it took this long before I caught anything. Every Japanese person told me it’s because we, foreigners, are not used to this weather. At first I thought this was ridiculous, because the first month here in Japan it has been so warm, I might as well be in Italy in midsummer. The weather was lovely! But then things started to change. One day it would be almost 30°C outside, the next only 16°C. If one day, you accidentally forget to look up the weather, you will most likely be under or overdressed, which is awful in both scenario’s. Underdressed speaks for itself, because it’s just freaking cold. But if you are overdressed, you sweat… Then you have to sit in an over air conditioned classroom and then go outside in the heat again, and then take the train, which is also air conditioned and you’re surrounded by coughing people as well. So yeah, it’s tough not to get sick during this season, to be honest.

So, I decided to make myself very comfortable and do something I love doing, which is reading and writing. The last book I read was “Girl on the train” by Paula Hawkins and I must say, it’s one of the best thrillers I’ve read so far. Literally every page ends with a clifhanger. I’ve recommended this book to many people already. The movie is coming out soon and I’m soooo excited to see it! I’m currently reading “The power of habit” by Charles Duhigg. In this book the author explains what happens in the brain when habits are formed and the scientific research that goes with it. He tells us about how we can change our habits and how companies have used this knowledge to make more sales. I’ve only read the first fifty pages but it’s definitely an eye opener.

Now, to get back to the actual point of this blogpost, my trip to Enoshima and Kamakura.

Two weeks ago, we had a day off from school, and we wanted to make the most of it by, of course, going sightseeing. Till now, I’ve never been outside Saitama and Tokyo, so I was really looking forward to going to Kanagawa prefecture. Someone recommended to us that, before we explore Kamakura, we should take the train from Kamakura and go to Enoshima for an hour or two to enjoy the scenery. We ended up spending our whole day in Enoshima.

Enoshima is a very small island, just off the shore of Fujisawa. The city and island are connected by a 600 metre long bridge!

We first took a look around Fujisawa and we found a temple in the middle of a small forest. It felt so good to be surrounded by nature again, after spending so much time in a concrete city.

Before climbing the stairs to go to see the temples on the top of Enoshima, we had delicious icecream. I had black sesame seed icecream, yumm! I was so happy we had that icecream, because I would never have been able to climb all those stairs without a sugar/energy boost. 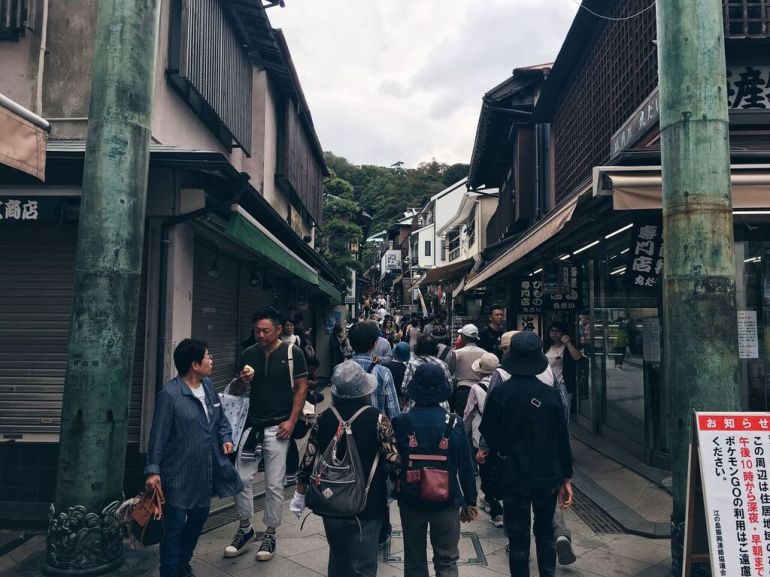 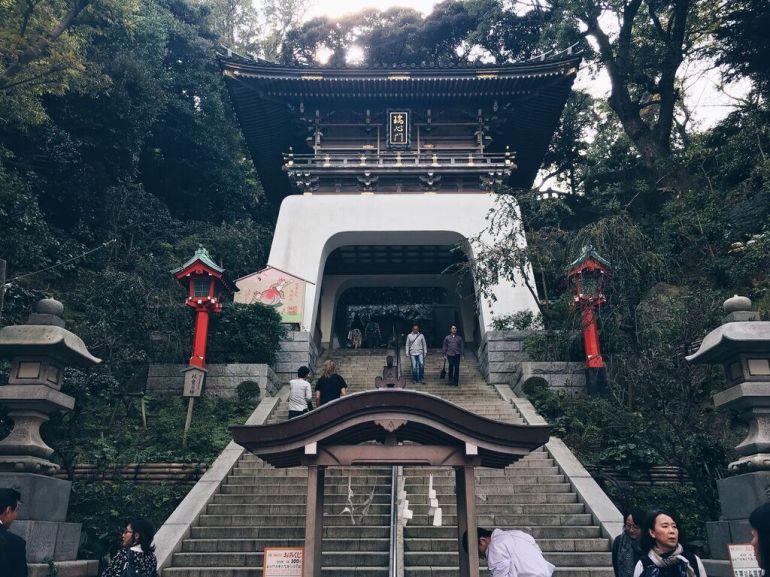 While climbing up and up, you see a ton of little shrines and gardens. Climbing those stairs was worth it though, because when we finally reached the top, we saw this incredible view of the sea and Fujisawa. 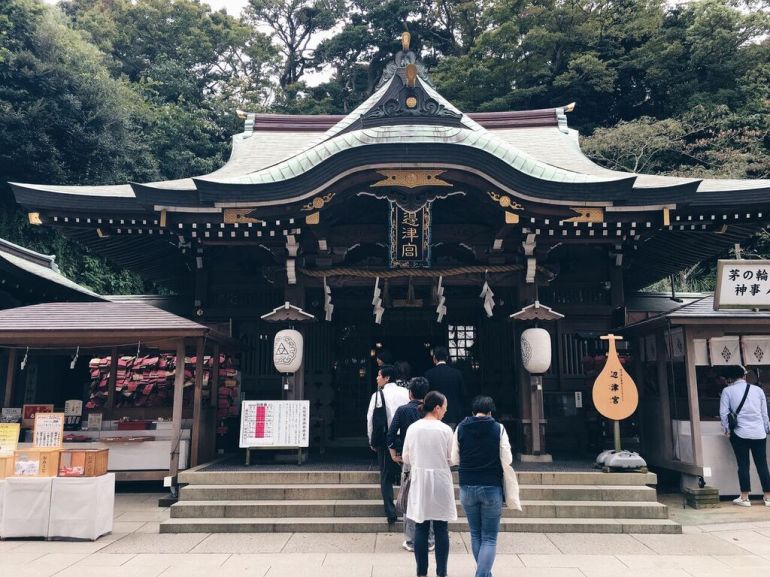 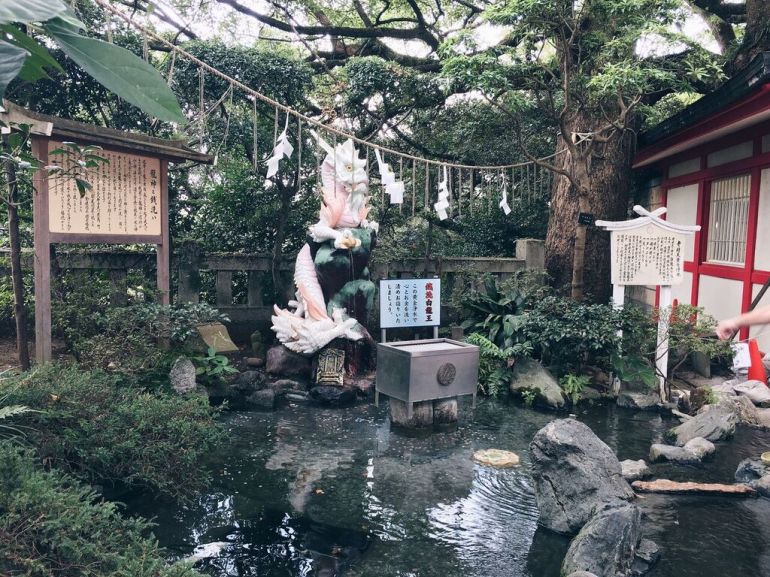 Me and Kayleigh, just hanging with our new best bud. 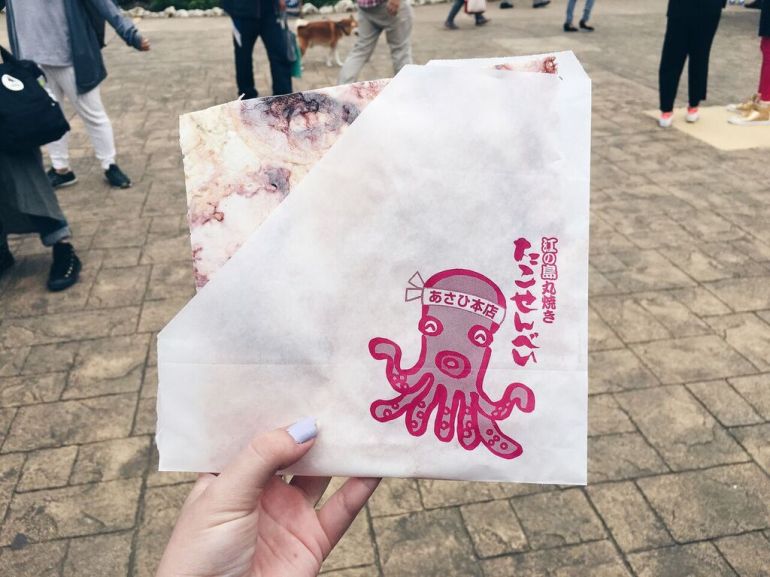 Everywhere on the island you were able to eat “squished squid”… They literally squished it right in front of our eyes and… well… I didn’t find that very appetising. But I did get a picture of the one my Finnish friend bought. 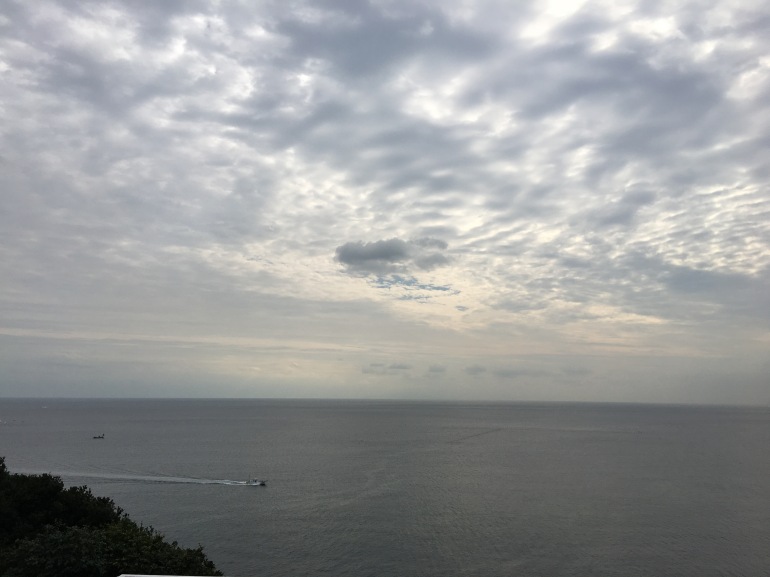 Back in Fujisawa, we ate a local dish called shirasu (whitebait). These are really tiny fish. I must admit, when I first saw the dish I thougt it was some kind of noodle. It’s served on rice with a soft boiled egg. This is supposed to be a delicacy, but I thougt it didn’t taste that special. It wasn’t bad, but I don’t feel the need to eat it again. It’s still worth trying out! Maybe you will like it.

After this we took the train back to Kamakura, and since it was almost 6 p.m. already we only had the time to see one more thing. And what is the number one thing you have to see in Kamakura, you might ask? Well it’s the Kamakura Daibutsu (the Great Kamakura Buddha). We walked quite a while before we reached the buddha. To see the buddha, you have to pay 200 yen. I was amazed by the cunning way the Japanese were able to hide this HUGE buddha. The place is surrounded by bushes, trees and hills, so you can’t see it till you’ve paid the 200 yen. But no regrets, because it’s beautiful! This really is one of the must-see things when travelling in Japan. A lovely lady was even able to take a group picture of us with the Buddha in full view. The buddha is surrounded by little shops and in the back you’ll discover a little Japanese garden. We paid 10 yen to get to see the inside of the buddha. This isn’t a particular “must”, but it’s kind of cool to be able to say to the world: I’VE BEEN INSIDE THE KAMAKURA DAIBUTSU! Just doing it made me feel kind of special.

So that concludes the story of my trip to Enoshima and Kamakura. I hope everyone had a great week and talk to you guys soon!