First of all, I would like to apologise for not having uploaded any blogposts in a long  time. The second semester in Japan was way harder than expected. A lot more homework and less holidays. I did keep my Instagram up to date, so be sure to check that out!

My finals are finally over and I feel like I can breathe again.  This is my very last week in the land of the rising sun. I don’t let myself think too much about it or I might burst in tears, as this has been the most incredible year of my life. It’s hard to realise that I have to part with this new life I’ve built for myself.

Anyway, since I have time more time for myself again, I decided to put some effort into my blog again, as it is something I love doing. I will probably not be able to upload everything I want to share with you guys in one week, that’s why when I’m back in Belgium I will keep on uploading episodes of my life in Japan.

The second day in Korea was even better than the first. We slept A LOT before we went out to do anything. We started our day of by going to Namdaemun Market. 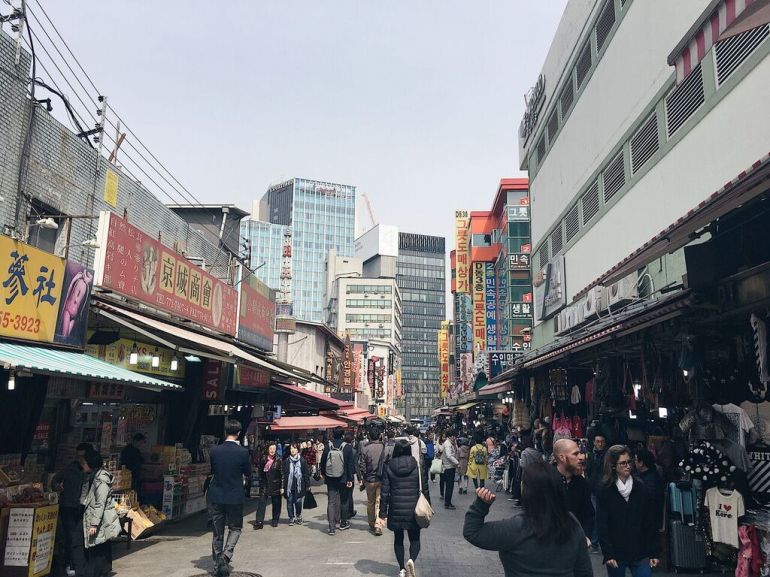 This is a large traditional market in the center of Seoul. It reminded me of being on holiday in Italy, because we just strolled through the market, the weather was amazing, while eating delicious local food. Another fun thing about Namdaemun Market is the bargaining! I’ve never tried it before, but it turned out I was surprisingly good at it. I got Kayleigh a suitcase at a seriously lowered price, and I got us both sunglasses for cheaper as well!

The market is located next to the Great South Gate. This was the main gate to the old city. 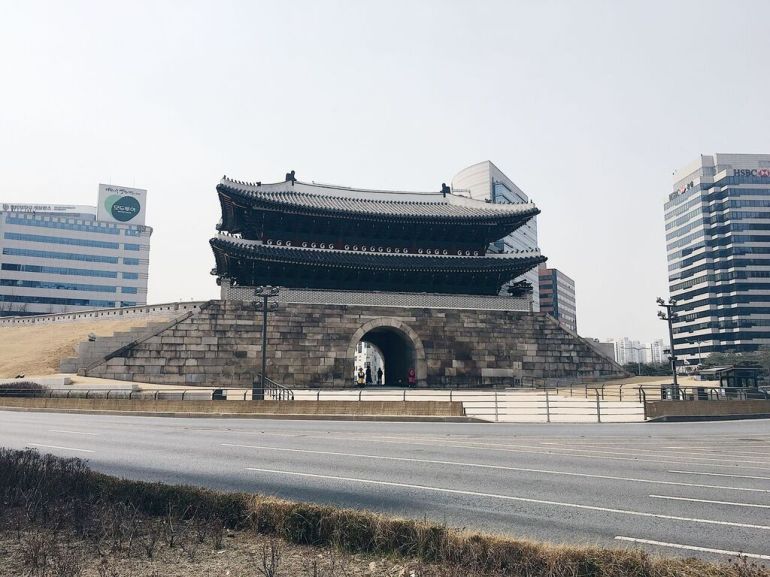 After this, we went back to our AirBnb to drop off Kayleighs new suitcase, and went back out to continue our journey. We really didn’t have that much planned, we just went with the flow. We had a vague idea of what we wanted to do, but ended up doing way more!

On our way to Deoksugung Palace, we stopped at a local Starbucks. Starbucks is seriously HUGE in Seoul! We could literally see another Starbucks from the one we were sitting at. This made us love Seoul even more because, as most of our friends know, me and Kayleigh basically live in Starbucks. 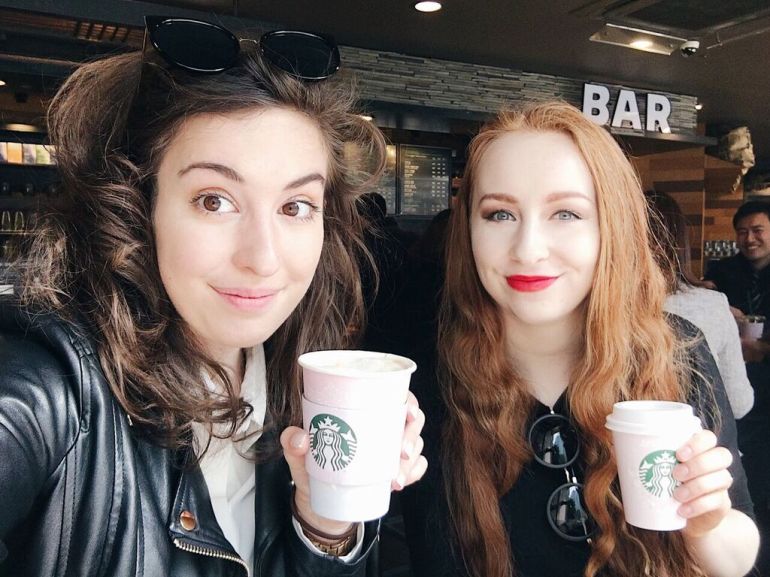 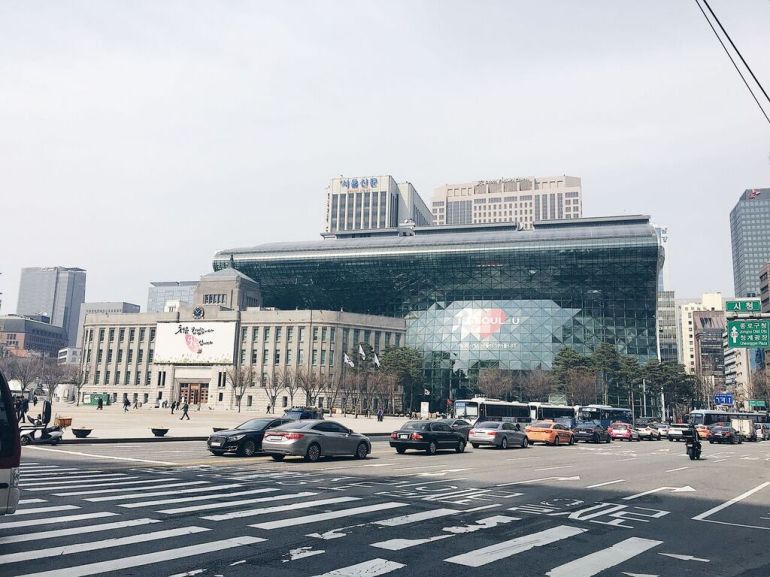 Before we could enter the Deoksugung Palace, there was a change of the guard march happening. It was really nice to see, but the guy with the drums scared the sh*t out of us! It was seriously so loud that my ears hurt for a while. 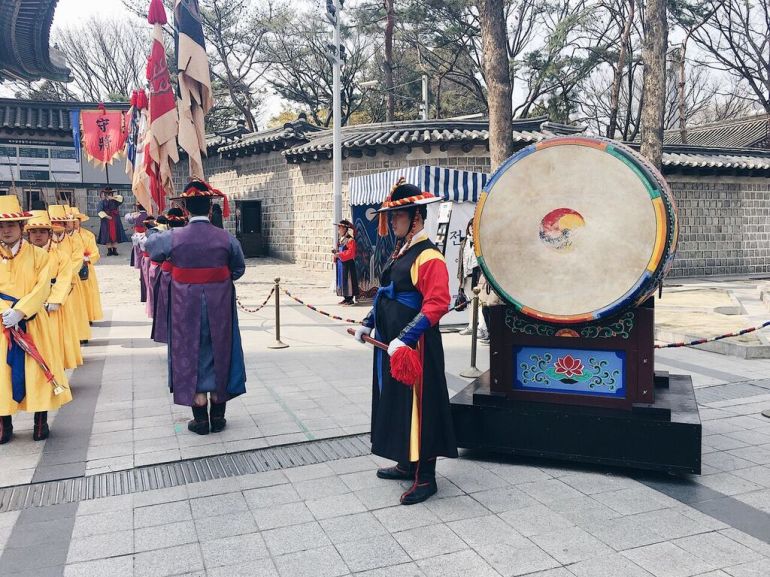 At the end of the march, all the guards had to stand still so that tourists could take pictures with them. Most people found this awkward and didn’t really dare to do anything, but me and Kayleigh went straight up to the leader of the clan for a selfie! 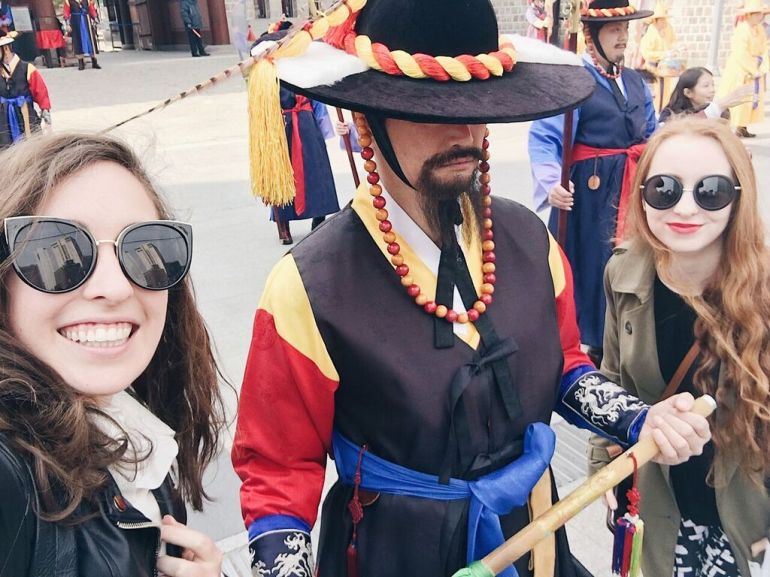 The palace itself was gorgeous. I’ll let the pictures speak for themselves. I especially loved the roof decorations. 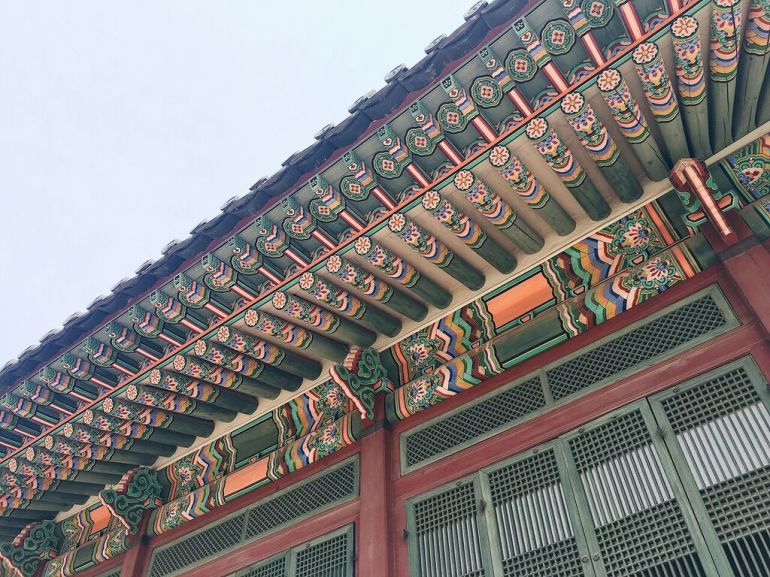 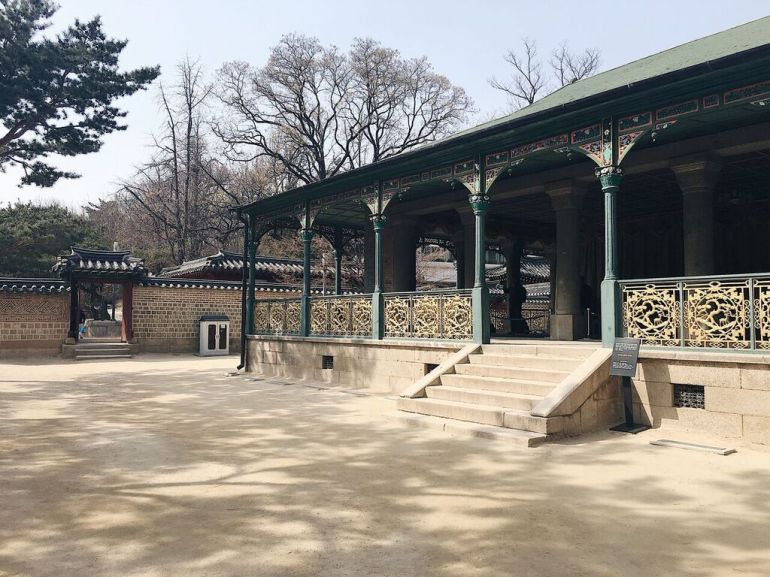 This palace was smaller than we expected, so we ended up going to another one (that we found by accident) as well that day. This was the Gyeongbokgung Palace. As this was not planned for that day, we didn’t really research anything about it, and we didn’t realise it was the BIGGEST palace in Seoul. We ended up spending hours in there. There were a lot of photogenic spots, so we did a little photoshoot as well. A popular thing to do there is to rent a hanbok (traditional Korean clothing) and take pictures around the palace. We didn’t do this, as this is very expensive, but it did make the sight a lot more spectacular. 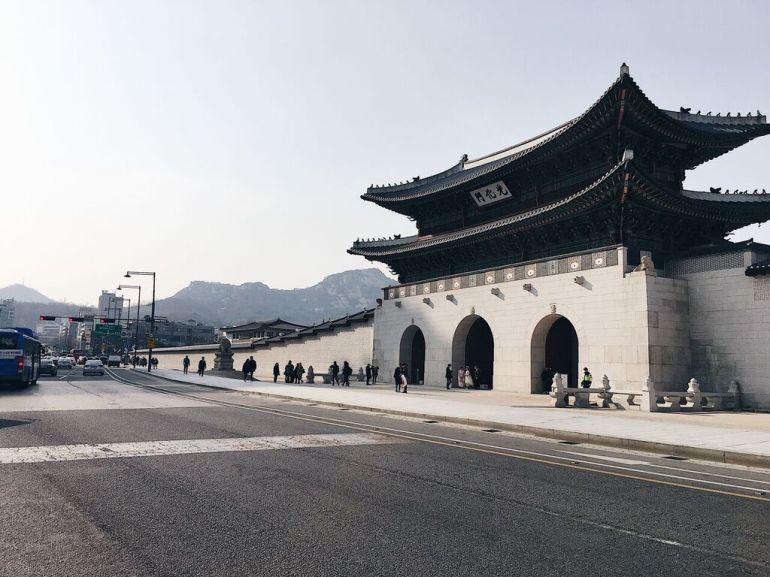 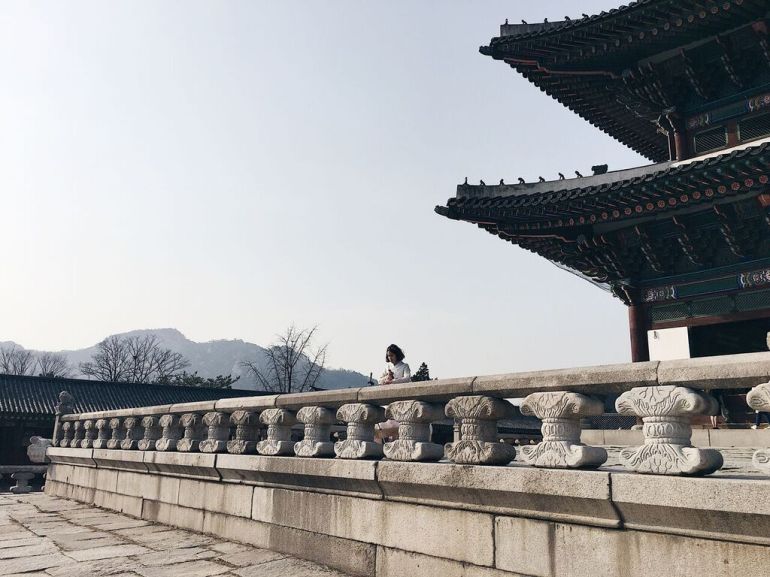 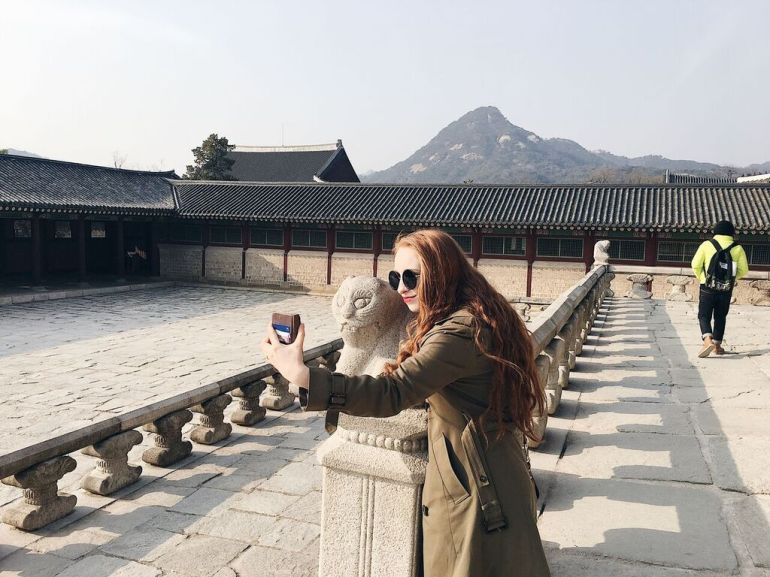 Kayleigh took a lot of amazing photo’s as well, so be sure to check out her insta account!

We ended our day with a traditional Korean BBQ. We also ordered some kind of Korean liquor that seemed to be very popular, but alas, it did not satisfy our tastebuds. We even had to order extra water to get rid of the taste. Luckily the BBQ was itself was amazing! 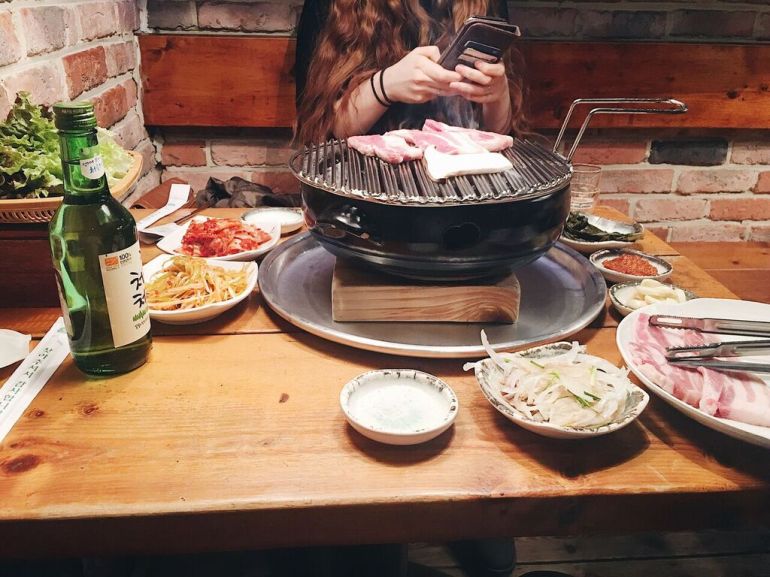 I hope you guys enjoyed this recap of my second day in Korea. If you have had any crazy experiences in Korea, please share them in the comments below.